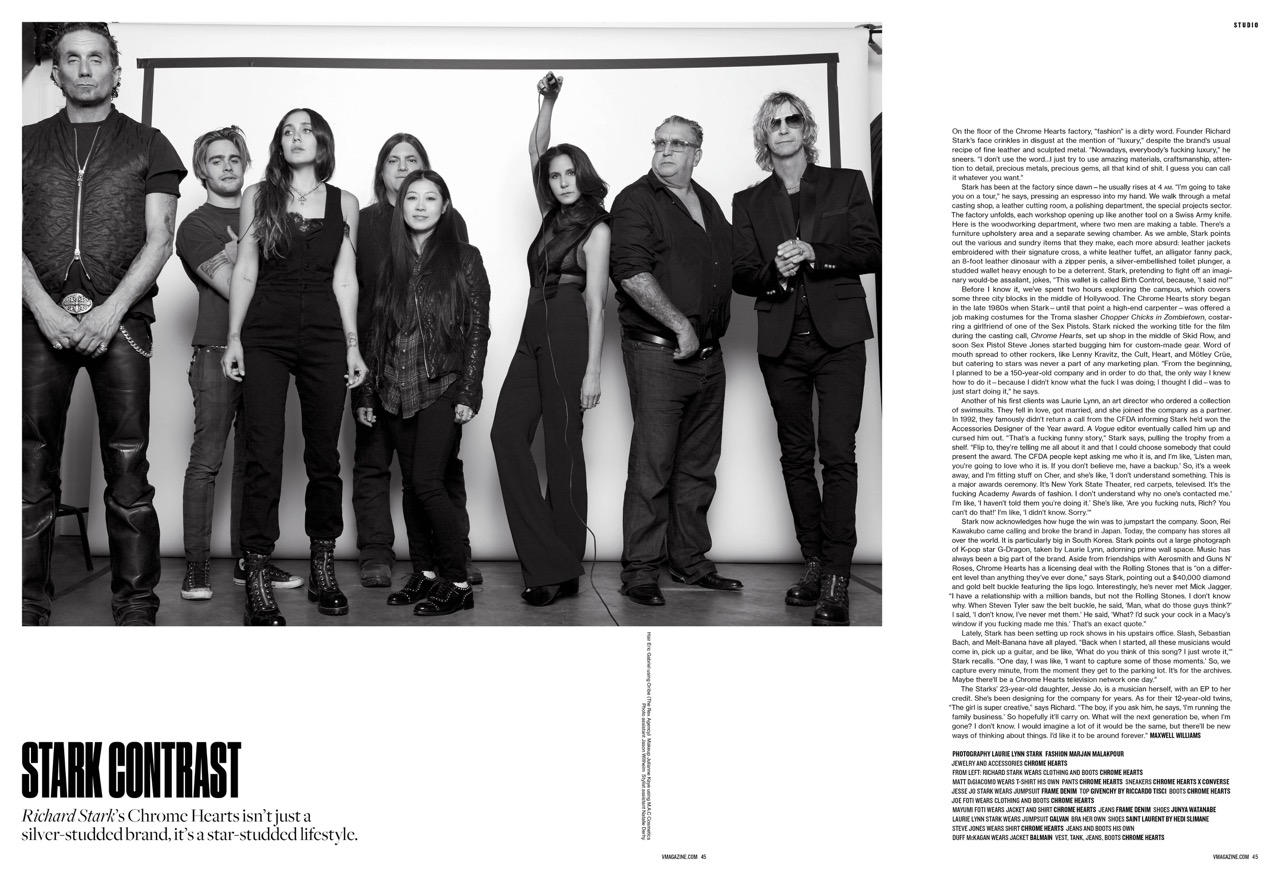 On the floor of the Chrome Hearts factory, “fashion” is a dirty word. Founder Richard Stark’s face crinkles in disgust at the mention of “luxury,” despite the brand’s usual recipe of fine leather and sculpted metal. “Nowadays, everybody’s fucking luxury,” he sneers. “I don’t use the word…I just try to use amazing materials, craftsmanship, attention to detail, precious metals, precious gems, all that kind of shit. I guess you can call it whatever you want.”

Stark has been at the factory since dawn—he usually rises at 4 am. “I’m going to take you on a tour,” he says, pressing an espresso into my hand. We walk through a metal casting shop, a leather cutting room, a polishing department, the special projects sector. The factory unfolds, each workshop opening up like another tool on a Swiss Army knife. Here is the woodworking department, where two men are making a table. There’s a furniture upholstery area and a separate sewing chamber. As we amble, Stark points out the various and sundry items that they make, each more absurd: leather jackets embroidered with their signature cross, a white leather tuffet, an alligator fanny pack, an 8-foot leather dinosaur with a zipper penis, a silver-embellished toilet plunger, a studded wallet heavy enough to be a deterrent. Stark, pretending to fight off an imaginary would-be assailant, jokes, “This wallet is called Birth Control, because, ‘I said no!’”

Before I know it, we’ve spent two hours exploring the campus, which covers some three city blocks in the middle of Hollywood. The Chrome Hearts story began in the late 1980s when Stark—until that point a high-end carpenter—was offered a job making costumes for the Troma slasher Chopper Chicks in Zombietown, costarring a girlfriend of one of the Sex Pistols. Stark nicked the working title for the film during the casting call, Chrome Hearts, set up shop in the middle of Skid Row, and soon Sex Pistol Steve Jones started bugging him for custom-made gear. Word of mouth spread to other rockers, like Lenny Kravitz, the Cult, Heart, and Mötley Crüe, but catering to stars was never a part of any marketing plan. “From the beginning, I planned to be a 150-year-old company and in order to do that, the only way I knew how to do it—because I didn’t know what the fuck I was doing; I thought I did—was to just start doing it,” he says.

Another of his first clients was Laurie Lynn, an art director who ordered a collection of swimsuits. They fell in love, got married, and she joined the company as a partner. In 1992, they famously didn’t return a call from the CFDA informing Stark he’d won the Accessories Designer of the Year award. A Vogue editor eventually called him up and cursed him out. “That’s a fucking funny story,” Stark says, pulling the trophy from a shelf. “Flip to, they’re telling me all about it and that I could choose somebody that could present the award. The CFDA people kept asking me who it is, and I’m like, ‘Listen man, you’re going to love who it is. If you don’t believe me, have a backup.’ So, it’s a week away, and I’m fitting stuff on Cher, and she’s like, ‘I don’t understand something. This is a major awards ceremony. It’s New York State Theater, red carpets, televised. It’s the fucking Academy Awards of fashion. I don’t understand why no one’s contacted me.’ I’m like, ‘I haven’t told them you’re doing it.’ She’s like, ‘Are you fucking nuts, Rich? You can’t do that!’ I’m like, ‘I didn’t know. Sorry.’”

Stark now acknowledges how huge the win was to jumpstart the company. Soon, Rei Kawakubo came calling and broke the brand in Japan. Today, the company has stores all over the world. It is particularly big in South Korea. Stark points out a large photograph of K-pop star G-Dragon, taken by Laurie Lynn, adorning prime wall space. Music has always been a big part of the brand. Aside from friendships with Aerosmith and Guns N’ Roses, Chrome Hearts has a licensing deal with the Rolling Stones that is “on a different level than anything they’ve ever done,” says Stark, pointing out a $40,000 diamond and gold belt buckle featuring the lips logo. Interestingly, he’s never met Mick Jagger. “I have a relationship with a million bands, but not the Rolling Stones. I don’t know why. When Steven Tyler saw the belt buckle, he said, ‘Man, what do those guys think?’ I said, ‘I don’t know, I’ve never met them.’ He said, ‘What? I’d suck your cock in a Macy’s window if you fucking made me this.’ That’s an exact quote.”

Lately, Stark has been setting up rock shows in his upstairs office. Slash, Sebastian Bach, and Melt-Banana have all played. “Back when I started, all these musicians would come in, pick up a guitar, and be like, ‘What do you think of this song? I just wrote it,’” Stark recalls. “One day, I was like, ‘I want to capture some of those moments.’ So, we capture every minute, from the moment they get to the parking lot. It’s for the archives. Maybe there’ll be a Chrome Hearts television network one day.”

The Starks’ 23-year-old daughter, Jesse Jo, is a musician herself, with an EP to her credit. She’s been designing for the company for years. As for their 12-year-old twins, “The girl is super creative,” says Richard. “The boy, if you ask him, he says, ‘I’m running the family business.’ So hopefully it’ll carry on. What will the next generation be, when I’m gone? I don’t know. I would imagine a lot of it would be the same, but there’ll be new ways of thinking about things. I’d like it to be around forever.”